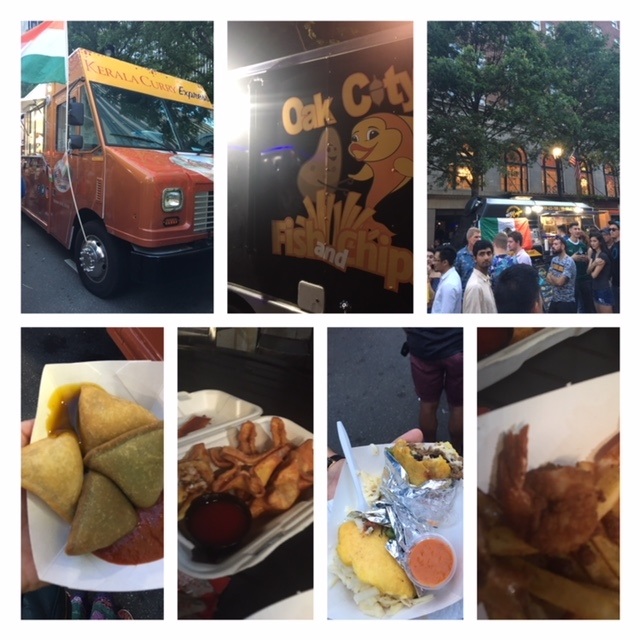 Playing catch up on our blogs, this summer is moving by quickly!  Several weeks ago, we had the pleasure of going to the International Food Festival in Downtown Raleigh.  We decided to walk over and try some of the different types of foods.  We had a blast.  There were about 20 different food trucks there which made it very hard to pick what we wanted!  There were a lot of people at the festival!  We went to the first food truck we saw with the shortest line and it was a Mexican Arepas food truck.  We have no clue why this food truck had a short line because it was excellent!  We split one chicken and one steak arepa and they had a wonderful dipping sauce that you can see in the picture.  The sauce was spicy but it was the kind of spicy where it is the flavor and isn't actually hot.  It was delicious.  Next, we went to the Indian food truck that you see in the picture, Kerala Curry Express.  Don't be surprised if Heather chases this food truck around Wake County because she couldn't quit talking about how wonderful this food was.  In the picture, you can see the triangle pockets which we learned are called samosas.  We shared two vegetable (has a mixture of vegetables, spices and potatoes) and two chicken samosas with their special sauces.  They tasted amazing!  Still wanting to try as many types of food as we could before the event ended, Heather and I split up so she could go to Oak City Fish and Chips and I could go to Hibachi Express.  As the food festival was ending, we realized just how busy the event must have been as these last two food trucks had run out of some of their staple items.  Oak City only had shrimp left and Hibachi Express was out of fried rice.  So, we ended up sharing the shrimp and homemade fries from Oak City and the Crab Rangoons from Hibachi Express.  Neither disappointed and we definitely were pleased with the food we tried.