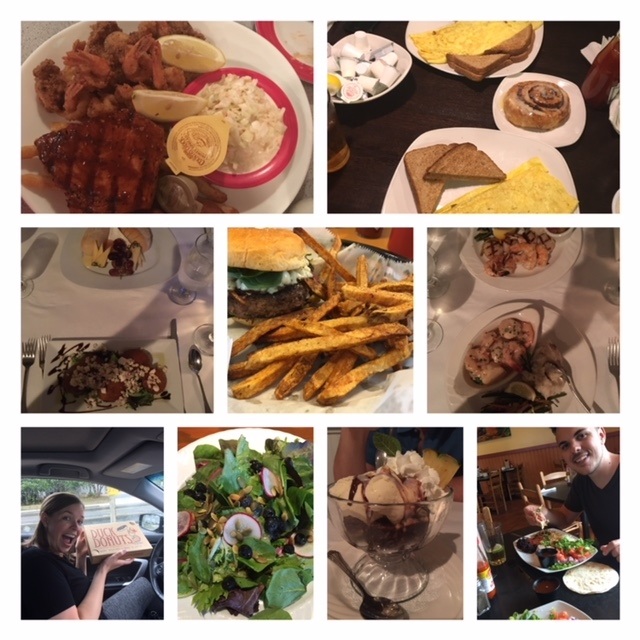 As you can see from the busy picture, we ate our way through Nags Head, Kitty Hawk & Duck, North Carolina!  After Heather's graduation, we decided to take a week-long vacation to this area of North Carolina as neither of us had been.  We actually hadn't ever taken a week-long vacation either, so we were looking forward to exploring, relaxing and of course trying new food!

Monday, our first day on the Outer Banks, we decided to try a local seafood restaurant, Awful Arthur's Oyster Bar, which was within walking distance of where we were staying. Awful is the last thing this place is!  This was the type of place that you would get to pick two or three types of seafood with sides as your entree.  They also have a full service "shucking" oyster bar!  We ordered the crab dip as an appetizer, a side salad, and for the entree a "choose three" of fried shrimp, oysters & the fresh catch 'hot and spicy' tuna with the sides of fries, slaw, and hushpuppies.  This was plenty for us to share.  The service was excellent and so was the food.  We decided that evening walking back to our condo that we would go back to Awful Arthur's on Friday night before we left on Saturday because it was so good!

Tuesday was our main beach day.  We decided to stay around the house this day, eat at the house, and just hang on the beach.  We did just that and it was great!

Wednesday, we were expecting rain so we headed out early because we wanted to do some sightseeing.  We ate breakfast at Miller's, which is a second row, family-owned restaurant that one of my Client's highly recommended.  Again, we couldn't be more impressed with the service that we received.  When our food was delivered from the kitchen, I knew exactly why my Client had recommended it!  Heather and I both ordered a western omelet.  I added sausage to mine and Heather added cheese.  As you can see in the picture (top right), the omelets were HUGE, and delicious, and I'm sure the sweet roll in the picture caught your eye as well.  It was equally delicious!  We actually had so much food, we split everything in half and took the leftovers to our house to have for breakfast the following morning.  After, going to the Wright's Brothers Memorial, Jockey's Ridge, Pea Island, and Bodie Lighthouse we had worked up quite an appetite.  We wanted tacos!  I searched on Yelp and found a beach front spot in Kill Devil Hills called the Rundown Café.  It was everything but rundown!  I got the tuna taco plate and Heather got the chicken taco plate.  What we thought was great is that everything came on a plate and you were able to put the tacos together yourself.  Very good and fresh.  Also, the waitress told us that they have a Bloody Mary bar on Sundays!  Good to know!  If it wasn't raining we would have sat outside as they seemed to have an excellent outdoor dining area.

We decided we would go to a sit-down restaurant that was suggested by our neighbor for dinner on Wednesday night, the Colington Café.  When we arrived at the restaurant, it seemed as though we were driving up to a friend's house.  The restaurant is a house that has been turned into a restaurant.  It still has the "home feel" even as you walk in the door.  We highly recommend making a reservation prior to going to this restaurant.  We were seated at our table which was in one of the rooms of the house.  The lights were dim (which we like for dinner) and our server arrived with menus right away.  We were very surprised at the wine list prices which seemed to be lower than what we were used to.  We ordered the house special Malbec and patiently awaited the fried green tomatoes and brie that we ordered for appetizers.  Our main courses were the Shrimp and Scallop Napoleon (cooked in a sherry cream sauce) and the Shrimp and Scallop Tropicale (grilled with fruit salsa topping) with sides of mixed julienne vegetables and mashed potatoes.  Excellent food!  While filling, we still had saved some room for dessert! Our favorite thing at a nice restaurant is actually seeing a dessert tray.  It makes us feel like a king and queen.  It's so nice to get to pick your dessert based on what it looks like and of course it was a tough choice!  We went with a hot chocolate brownie cake topped with ice cream and whip cream.  I'm surprised that we managed to get a picture of our dessert because as soon as it was sat on the table we dug in!  After these meals, we were definitely ready for a good night’s sleep.

Thursday was our day that we planned to go to Duck, NC to explore.  Heather planned us an awesome yoga class at Village Yoga, highly recommend it!  Then we were going to walk around more on their walk way that traverses the sound side, but as the rain set in we decided to head to lunch.  We went to The Blue Point which was another spot that our neighbor told us about.  Wow, was it great!  It was very fresh food.  After everything we ate the night before, we were ready for a salad!  In our picture above, we did get a picture of one of the salads.  This restaurant was on the water on the sound side, which we could tell would be wonderful spot to have dinner at sunset.  Also, while in Duck we had to try Duck Donuts.  Even though there is a location in Cary, NC, we felt that we should try the original.  These were excellent and made to order.  I'm a Krispy Kreme guy since I am from Winston Salem but these donuts were very, very good!  We really enjoyed being able to pick out our glaze and toppings.  Heather's favorite was a blueberry glaze topped with powdered sugar and mine was a peanut butter glazed with chocolate drizzle.  We will definitely be going back to Duck at some point!

Friday, we were ready to round out our week of wonderful food!  We decided to try a burger joint, Art’s Place, that someone we had met the night before had suggested.  Wow, would we have been missing out if we hadn't heard about this spot!  I truly think this could have been the best burger I have had.  I went with the classic, House Burger topped with lettuce, tomato, onion, mayo and mustard and Heather got their version of a Black and Blue Burger.  We were blown away.  Such a wonderful treat and a must stop if you are in the area.  Also, they have a good beer selection and homemade fries!  Nothing but great things to say.  It is a small place so don't be surprised if there is a wait for a table BUT it is worth it!

Lastly and as promised, we did go back to Awful Arthur's Oyster Bar on Friday night for dinner.  We couldn't beat the amazing food and it being within walking distance.  And to even top it off, we ordered the exact same thing that we ordered on Monday night and it was just as good!

We had such a wonderful week at the Outer Banks!  We cannot wait to get a chance to go back and explore even more.